Mathematica has some basic LaTeX export possibilities built in. However, the LaTeX support is far from optimal and at times quite buggy. I just came accross two issues: Missing support for Subsuperscript and nonsensical \left and \right statements which are inserted in connection with Abs. I wrote a short python3 script as a workaround (together with Mathematica integration).

Minimal example for the bugs: 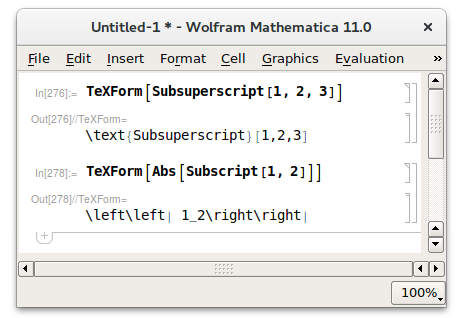 The workaround comes as a python3 script texexpression.py, which either takes Mathematica generated LaTeX strings as an argument or reads them from stdin.

If texexpression.py is in the same directory as your Mathematica file, it can also be called using the Mathematica wrapper fixLatexErrors.

Again the example from above:

As it should be.